Happy Thanksgiving Ya'll! The kids are watching the Macy Thanksgiving Day Parade while laughing, argruing, and playing all at the same time. Life is Good!

We would like to tell everyone thank you all for all of the support and kind words you send our way. 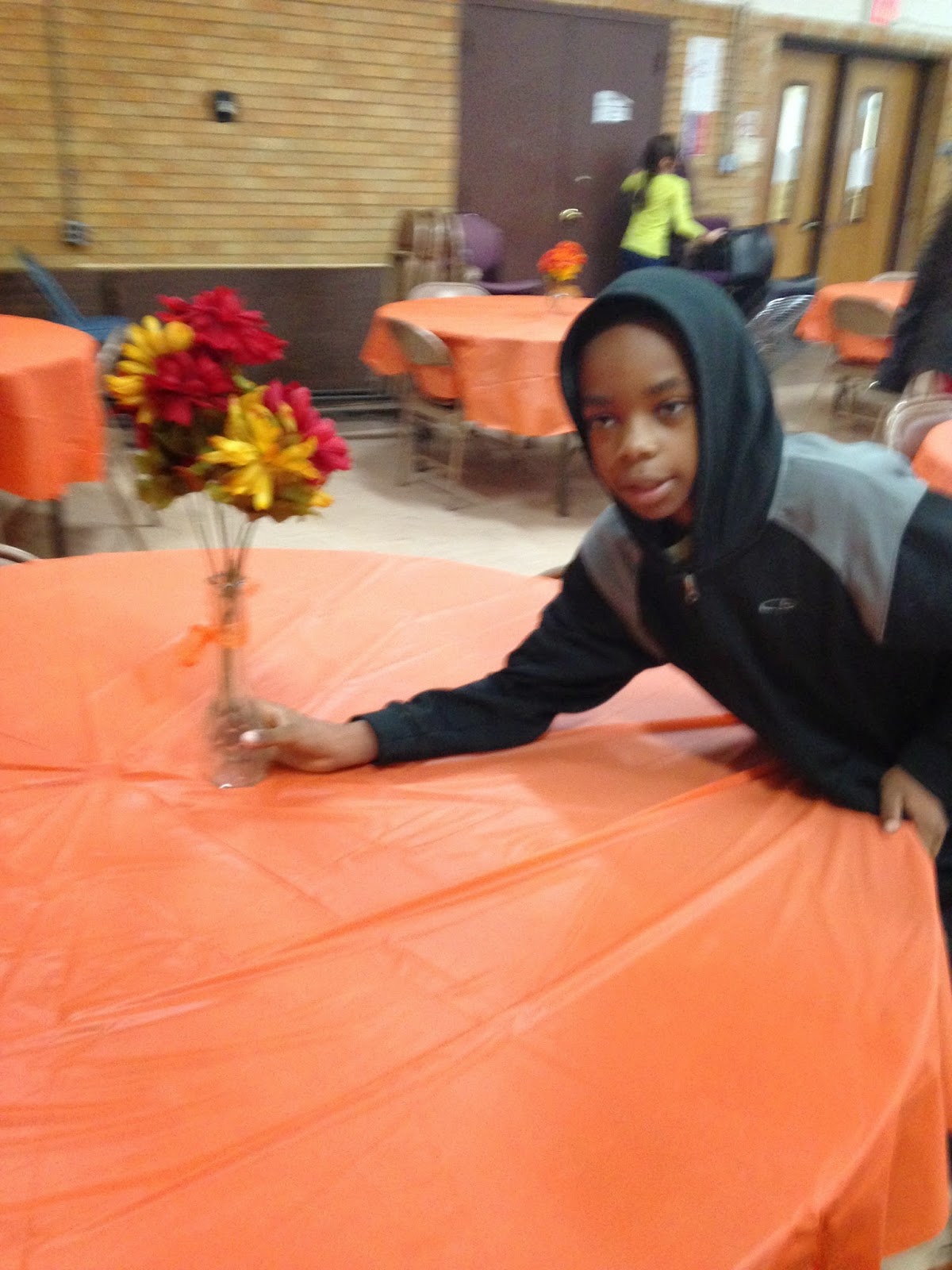 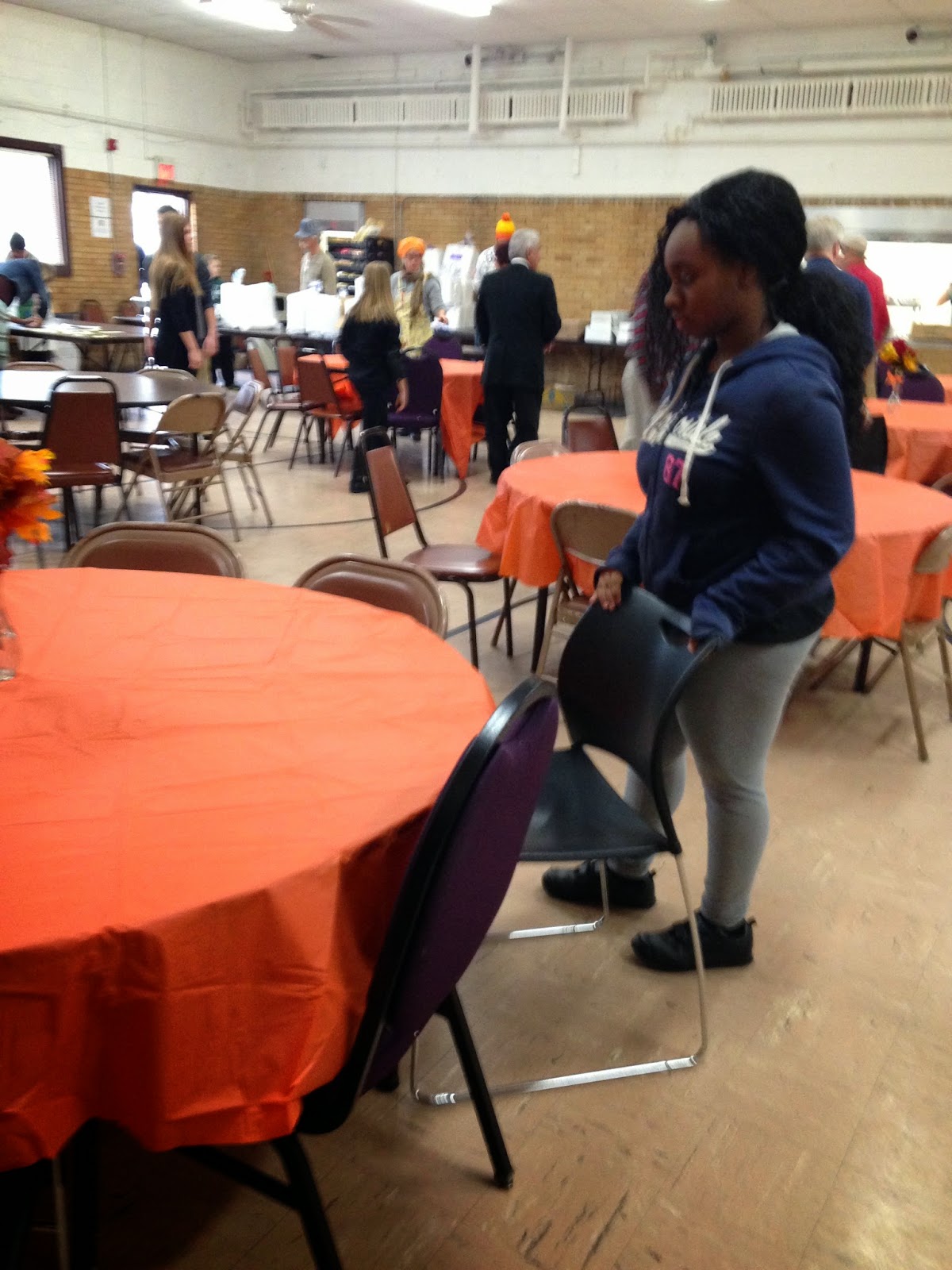 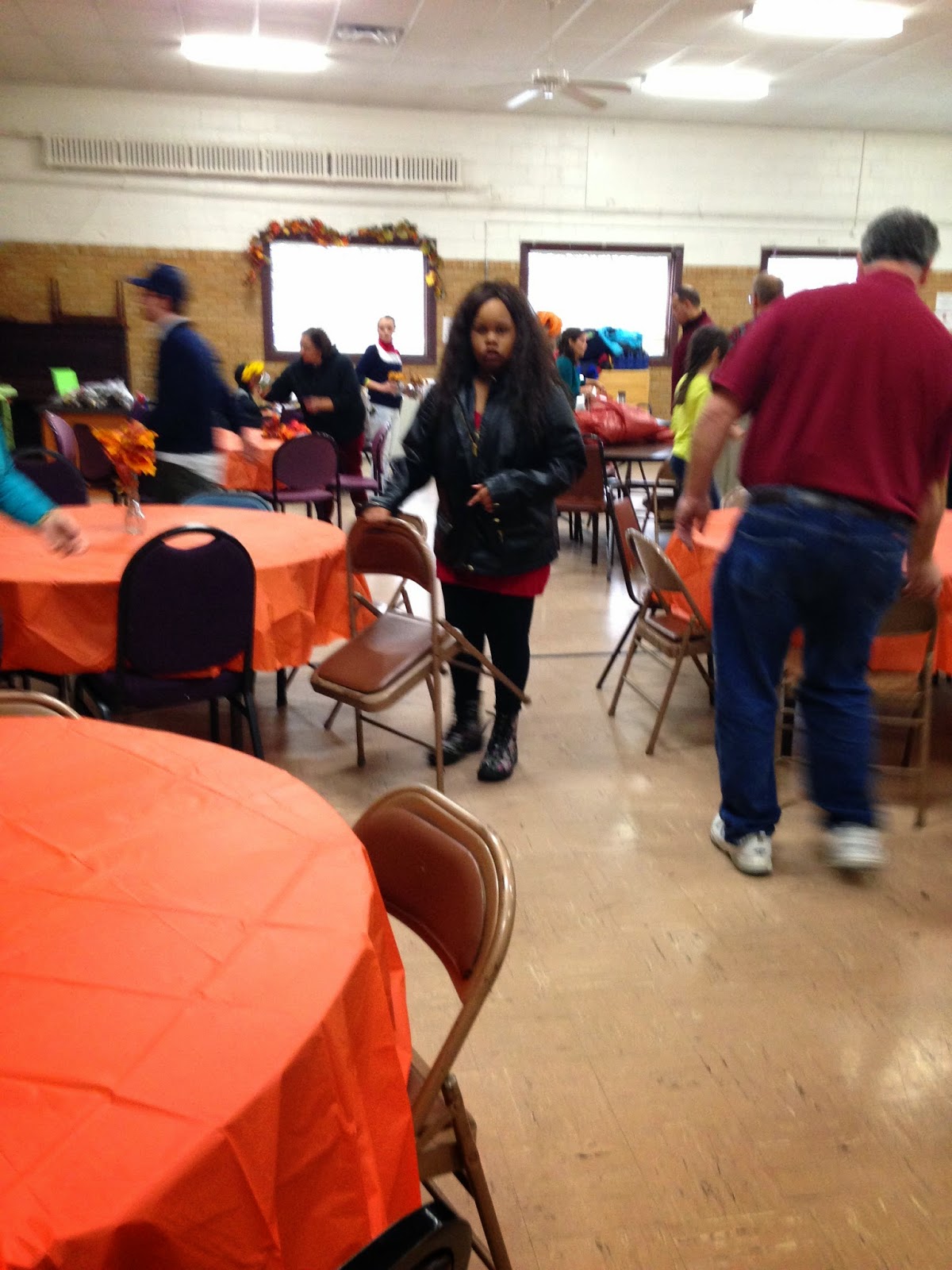 This morning we were blessed to be able to volunteer at one of the community centers who are hosting Thanksgiving dinner for those with hardships. Last winter our power was out for nine days, I just don't know what we would of done without the support of our community.

Just waiting on Turkey Time! Savor the moments everyone.

Posted by Unknown at 9:20 AM No comments:


So I have some work cut off for me. I know the tables are too big!! They fold down easily  They can be stored away. I am use to walls being in this space. I am confident that once the layout is figured out I could make everything else awesome.  I am starting out with Practical Life and art shelves. Also there will be a larger table that can accomodate older kids when they visit the space too. 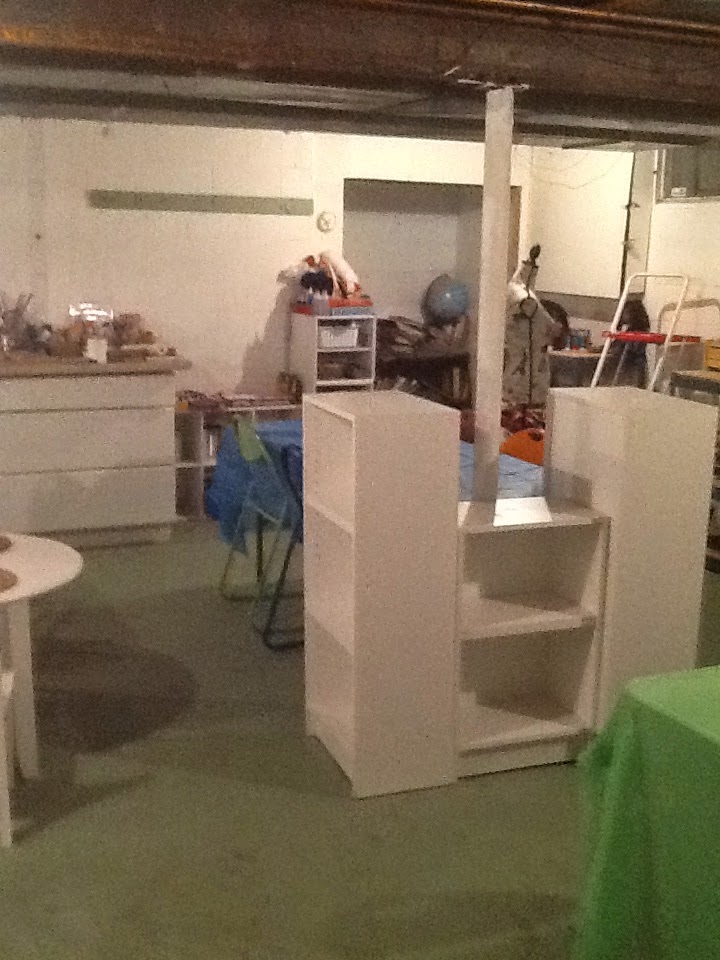 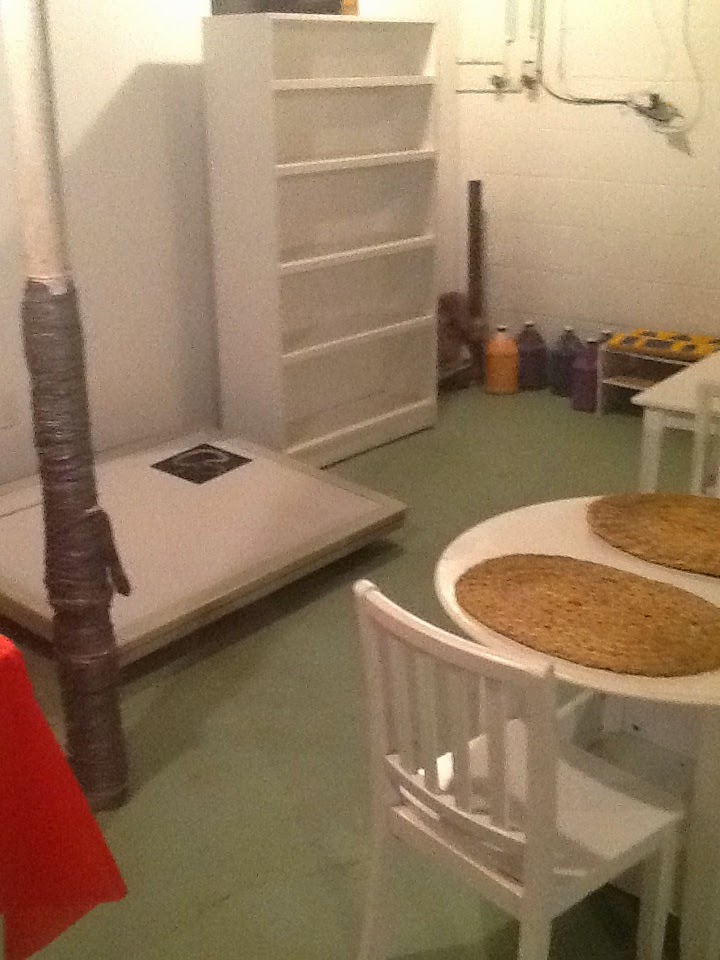 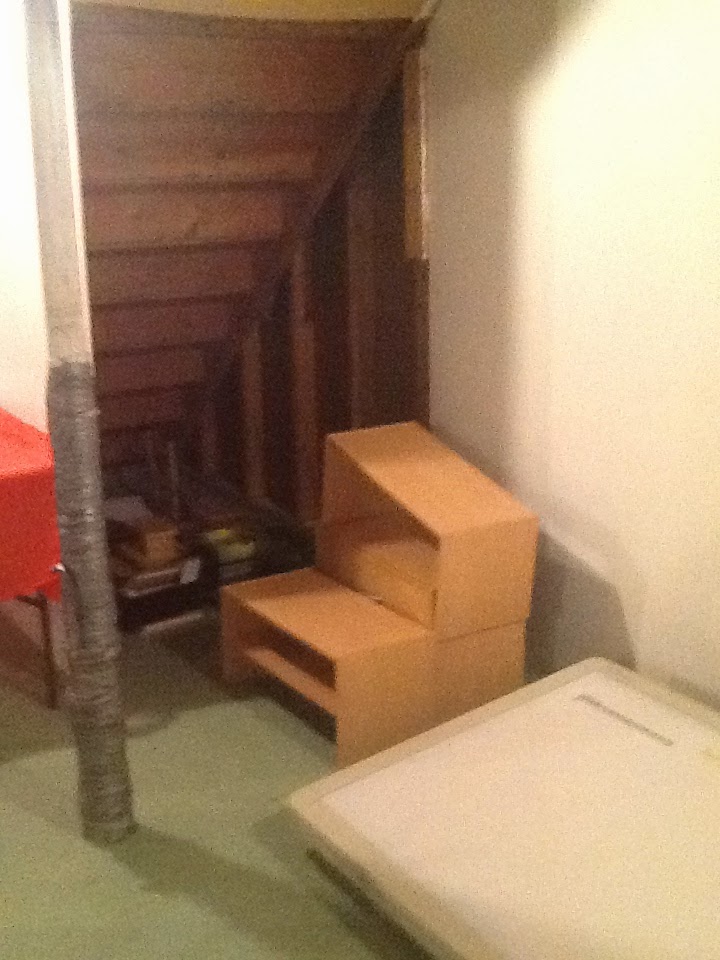 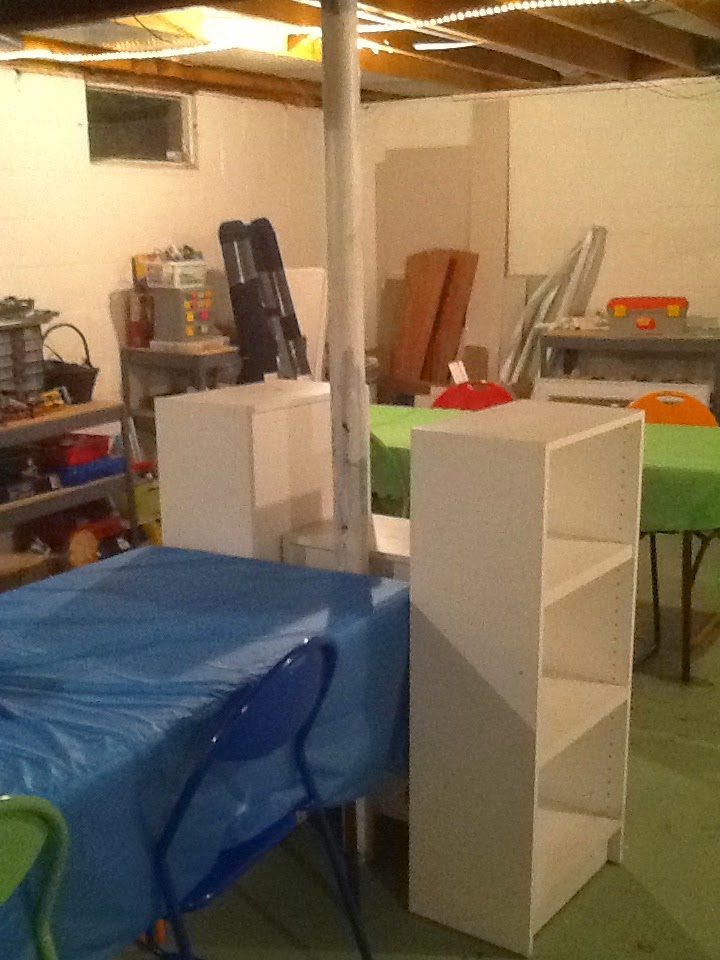 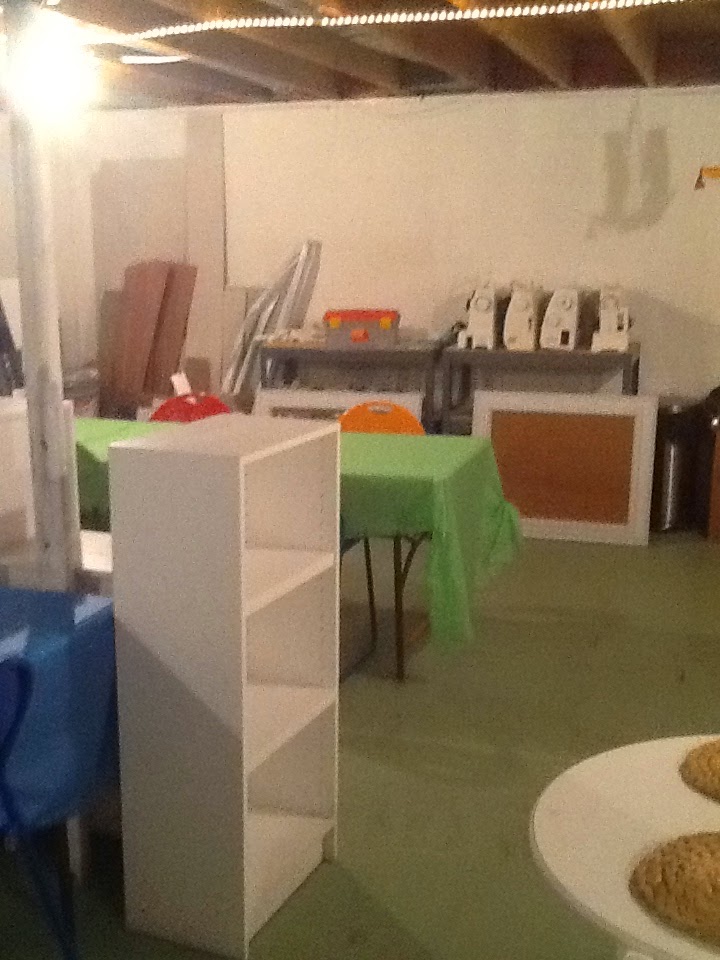 The shelves can be lowered and also decorated. All the sewing machines are not needed. Shelf space I don't think with be a issue. 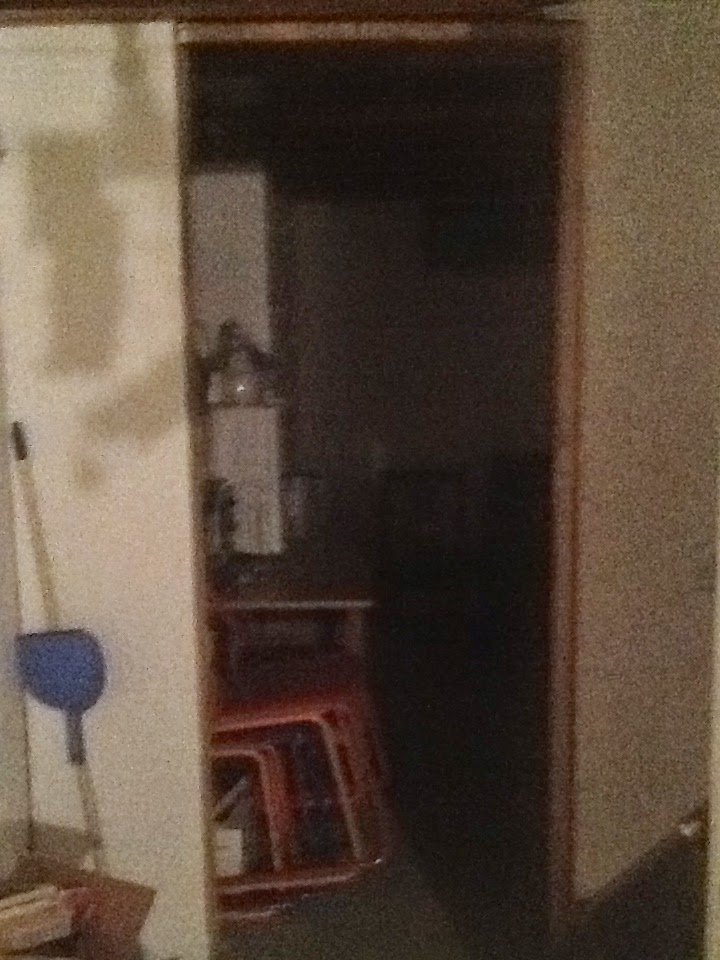 This is the other room where the snack table with be, also a volunteer table , microwave, and a mini refrigerator. The electrician will not be able to fix it for another two weeks.

Any suggestions are welcomed! Thank you!!
Posted by Unknown at 7:21 PM No comments:


Welp! We started  back up those Latin lessons again and the kids needed to know "Why do we have to learn this stuff". We started right back with Lesson 1 in Prima Latin for a review. Guess what? 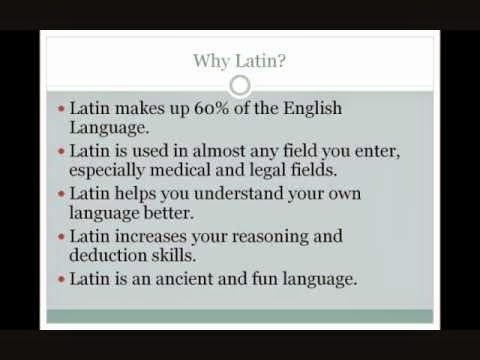 I didn't even have to explain why I feel it is a language important enough to know, because their Latin Teacher explained it to them and quite well I must add. 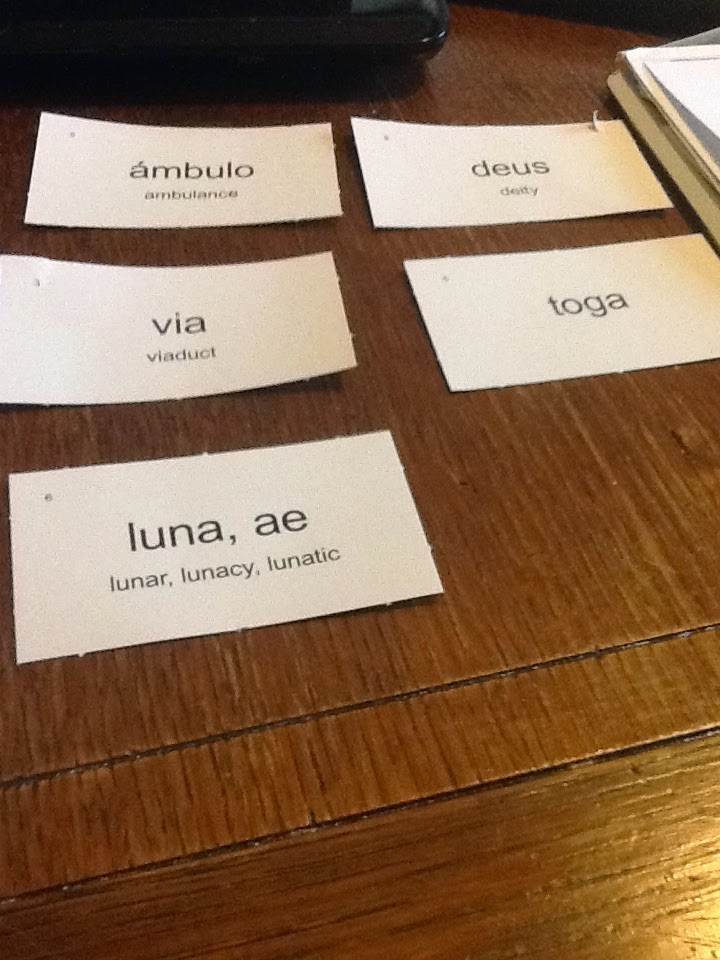 They reviewed the pronounciations of the Latin Vowels, and how to greet someone speaking Latin. Salve! 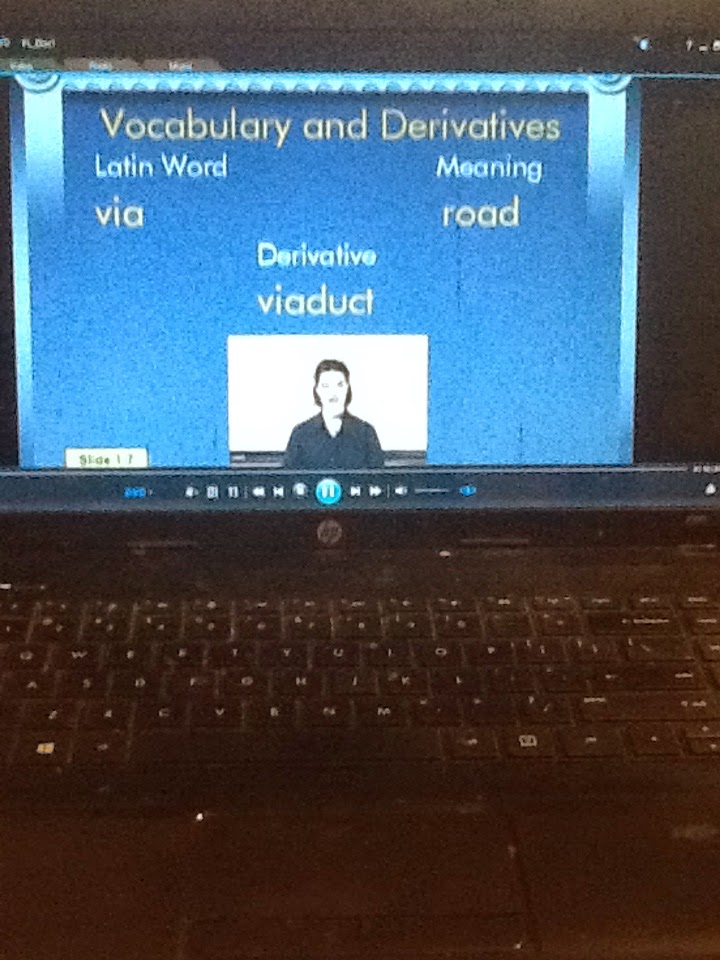 Reviewed vocabulary and derivatives of the words introduced in the lesson. 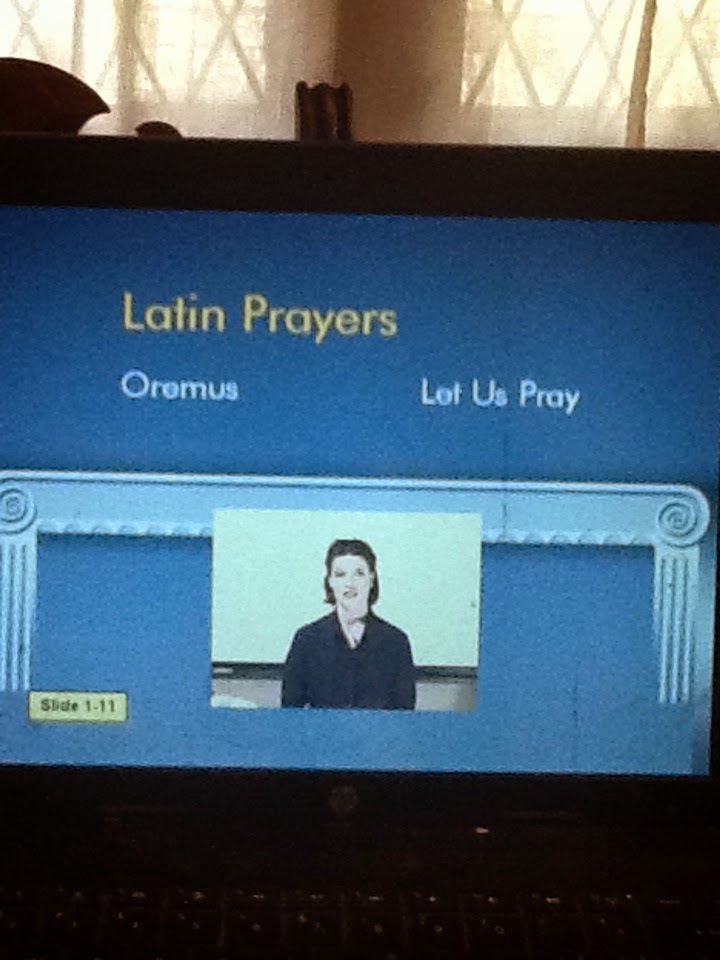 They also learned how to begin a prayer in Latin.

See I wasn't too hard on them today. In fact their wheels were turning and they realized that we were doing grammar too. I love homeshooling!!
Posted by Unknown at 3:06 PM No comments:

It was nice going back into time today as we continued to read through our History of Us books and discovered more about what Native Americans used for shelters. This chapter in their books also allowed for an invitation to the Fundamental Needs of Man. We also poured through much knowledge in our Usborne History books about how other indigenous people of the other six continents developed this need for Shelter too. 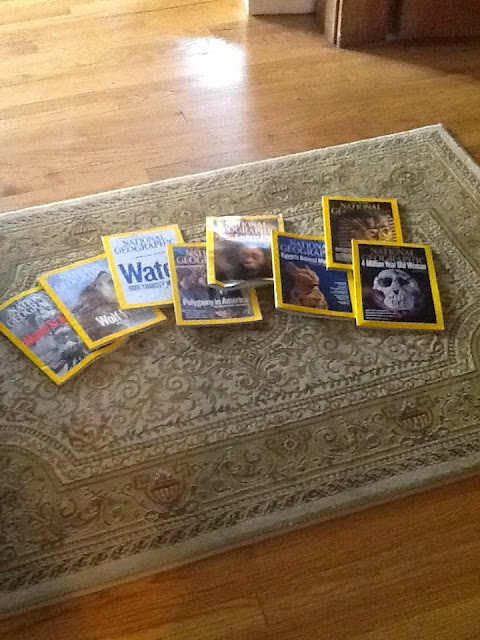 We have several National Geographic books that I picked up some time ago from the Thrift Store. The kids used them today to also discover various pictures of shelters. 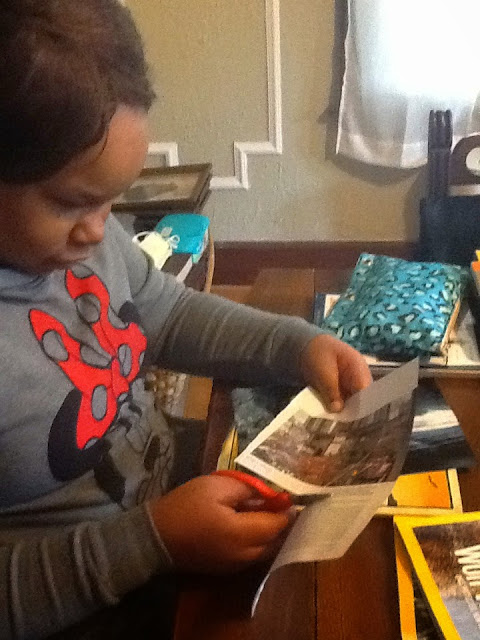 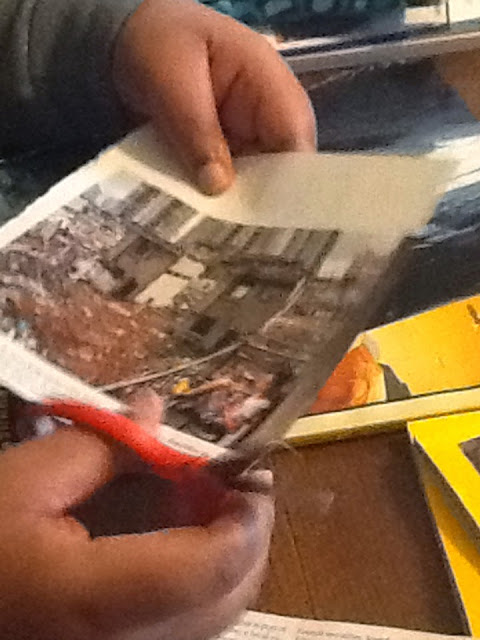 The cutting of the pictures of various shelters helped to guide our discussion on the topics. 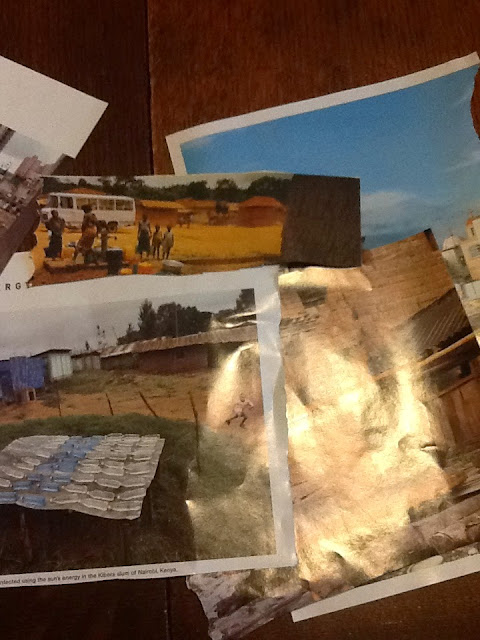 This was a great intro into our study on shelters. I plan to cut out more pictures and laminate the ones that they cut out as well. I want to make a work that will make more of an impression. The work that they did today definitely showed that they have interest in learning more about shelters.

Ken and DJ both begin word processing their snapshot autobiographies.
Posted by Unknown at 4:08 PM No comments:

Today we decided to our "schooling" at the library. We have found that doing school at the library is an awesome way to combat those distractions that come our way, Yes! There are distractions at home, especially the phone constantly ringing and me trying to multitask when really all my attention should be on the kiddos during school time.


We started out by reading chapters out of their books that go along with the Boomerang and Arrow issues from our Brave Writer Curriculum. Ken also did copy work, that focused on the misuse of commas and more on when to use hyphenation. DJ's focus was on ellipses and metaphors. 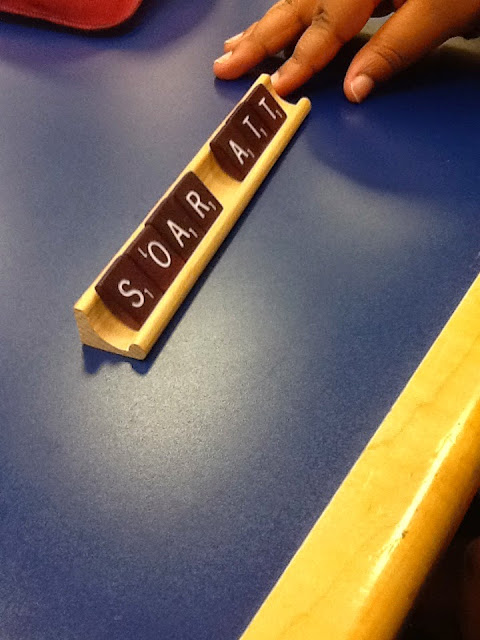 Our Word Play game of the week is Scrabble. It was really neat how they were setting up their boards in hopes to be able to get those points, then finding out that they would have to change up their plan again as soon as the last person finished laying out their tiles. I had to remind them of the rules often, which made this game even more of a reason and great pick to make sure we have some hands on fun with our language arts lessons. 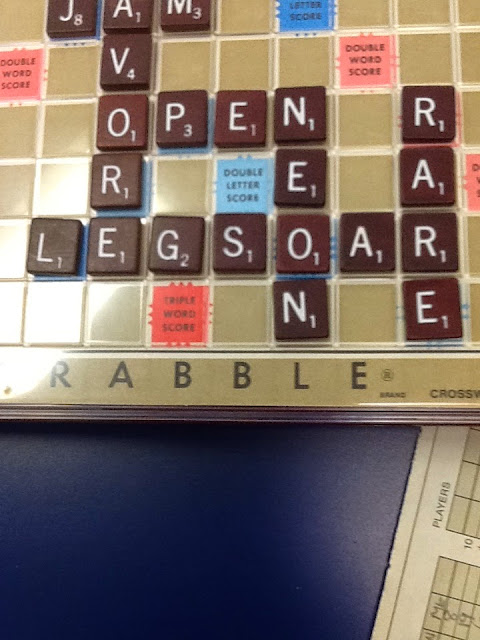 So DJ's  reading book is Frindle by Andrew Clements. In the book a fifth grader by the name of Nicholas invents a word. The word is Frindle which Nicholas states means a pen. His teacher doesn't accept Frindle as a word and then Nicholas gets huge support for his invention. I'll stop right there before I tell you the whole story, because it is a good book in my opinion and I think you just might want to read it yourself :) DJ thought that "legsoar" was an acceptable word (actually he knew he was reaching, and I know what we are reading in Frindle), which led us to decide on which dictionary we would use to verify if it was a word or not. 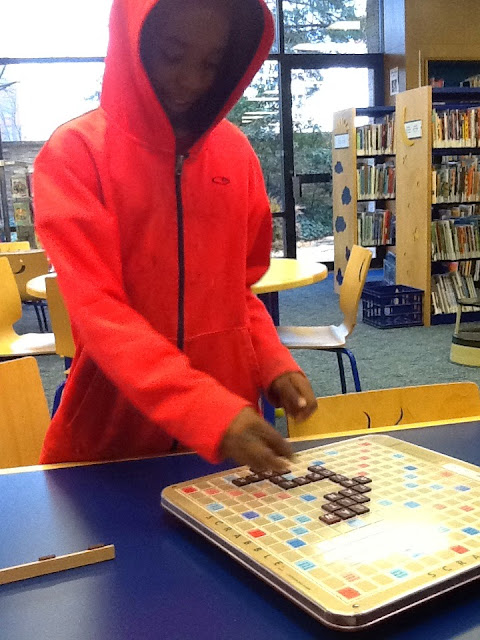 Nope! "legsoar" isn't a word, and it wasn't even in the dictionary. As soon as we pulled out the dictionary, this game became seriously fun! 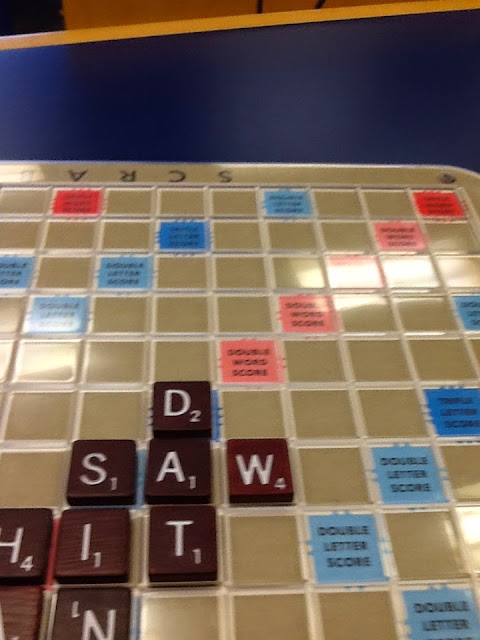 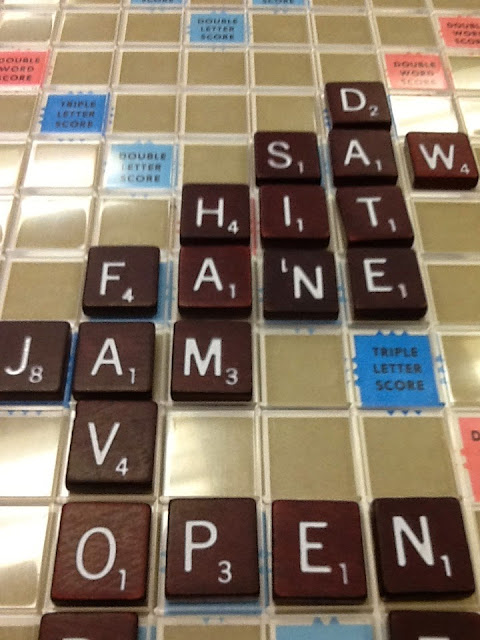 However "Date" and "Fane" are words in the Oxford Dictionary. Great work, Ken!

It was just awesome to read in Ken's Work Plan journal where she wrote that she learned a new word today! More Scrabble is in order :)
Posted by Unknown at 3:12 PM 2 comments:

Thanks to the Board of Directors of Brain Builders Inc. I have been able to do a complete 360. Well not exactly a 360, because really this journey I have been on has taught me so much. It has taught me what I am most passionate about. Pop over here to see what awesomeness is in store for us. Now I will be activey blogging in two spaces on the web now. If you have the time leave a comment so I know you stopped by. Thank you! I am just beyond excited. Success for all!!
Posted by Unknown at 9:19 AM No comments:

We read together chapters 8 and 9 in Volume I of the History of US series. The chapters discussed the languages that different Indian Tribes spoke and went into detail about the Plain Indians. Our reading took us 45 minutes today, because I also lead with discussion using some of the questions that are included in the Teacher's Guide. 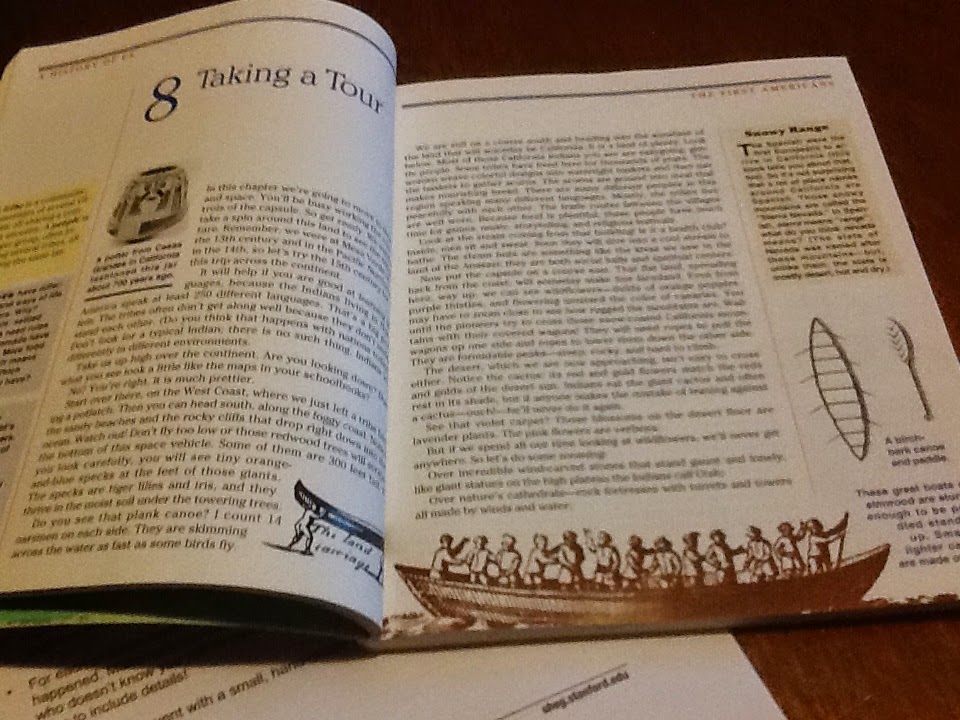 After we were done reading the kids started working on their final Intro Lessons to Reading Like a Historian. They are writing short autobiographies, well not a short one for Ken this girl loved this assignment. 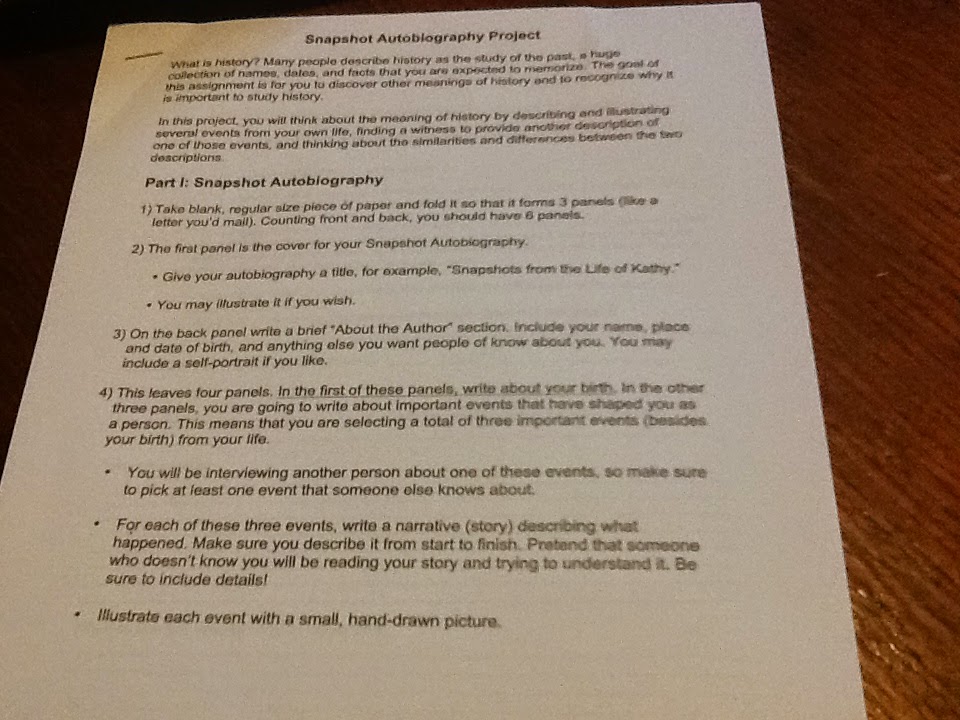 The assignment is usually done in two parts, but since we dedicated 3 hours to history today they completed the second part which was interviewing someone that could hopefully corroborate what they remembered about their own life history. DJ interviewed me and Ken interviewed my mother since we were doing school at her house this morning. 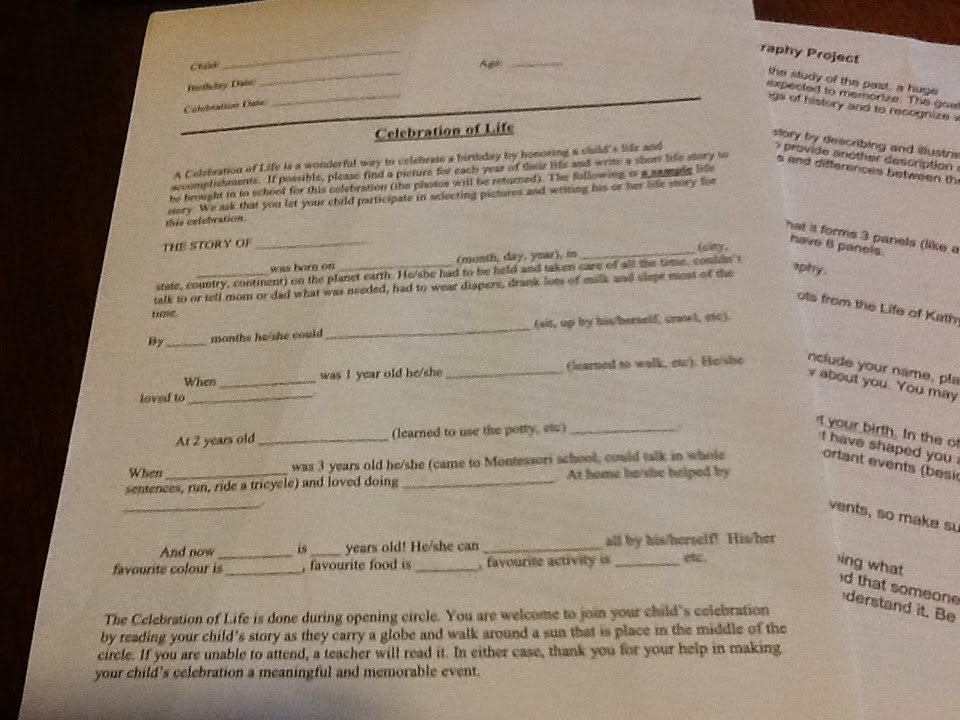 To jog their memories a bit I shared with them the Celebration of Life outline that is available for free here. My mother and I had to agree that when time passes you can forget unless you have a daily journal of some kind, actually Ken had to correct me on a few things and she was able to go to our old homeschool blog, We Don't Need No Education to prove me wrong :) This activity was fun and went well over the three hours we had planned, and I am not complaining one bit about it. They will polish their work up, by putting the factual information into a story format. I think after today they have a clear understanding on what types of credible sources to consider depending on the history question being asked, and that corroboration must take place to even consider validation of a source. One thing is for sure these two kiddos are absolutely amazed by their lives, and they should be!

Posted by Unknown at 4:52 PM No comments: